India – a land of many contradictions

One size does not fit all. True in every sphere of real life; truer and more critical in conducting business in a vast country with many stories!

India is vast. India is diverse. Hearts of 1 billion people, with numerous ethnicities and large differences in socio-economic conditions, may all beat together, but their aspirations, dreams, demands, and expectations are varied. ‘Diversity in unity’ being the mantra here, navigating India and the Indian business landscape needs a multidimensional view. This document attempts to provide the readers with these varying perspectives, and contradictions that influence society and business in this great land with 5000+ year old civilization.

India’s Technology landscape spreads from deep tech at one end to no technology at all at the other end with scores of people having no access to electricity, sanitation, and clean drinking water.

Urban India and urban Indians’ lifestyle is starkly different from their cousins in rural India. Infrastructure, Healthcare and Education available to Indians living in far-flung remote villages stand nowhere close to those of urban Indians.

There are 22 languages listed in the Indian Constitution with another 99 unofficial ones. India celebrates over 30 grand religious festivals yearly across the nation. The list goes on.

And finally, India is deeply spiritual and starkly materialistic at the same time!

The enormity of the differences that exist across the length and breadth of this country begs closer attention and deeper perspectives to really understand what drives this nation.

Abundant dualities that exist in India in many spheres and in multiple forms impact social and economic conditions. It leaves its imprint in the way Indians develop themselves, the way Indians interact with each other, form their perspectives individually and collectively and the way they conduct their business.

Extreme conditions pose additional complexities in designing and developing systems, processes, business models. The wide variability of resources, both at the demand and supply end make resource allocation a formidable task for all enterprises, be they governmental, public or private ones.

To be aware of these realities makes for the efficient design and operation of institutions, regardless of the nature of these institutions or the purpose they are built for.

How do these apparent contradictions play out?

More than 70 years after India became free from colonial rule, Indians generally feel their country has lived up to one of its post-independence ideals: a society where followers of many religions can live and practice freely.

India’s massive population is diverse as well as devout. Not only do most of the world’s Hindus, Jains and Sikhs live in India, but it also is home to one of the world’s largest Muslim populations and to millions of Christians and Buddhists.

A major new Pew Research Center survey of religion across India, based on nearly 30,000 face-to-face interviews of adults conducted in 17 languages between late 2019 and early 2020 (before the COVID-19 pandemic), finds that Indians of all these religious backgrounds say they are very free to practice their faiths.

Indians see religious tolerance as a central part of who they are as a nation. Across the major religious groups, most people say it is very important to respect all religions to be “truly Indian”. And tolerance is a religious as well as a civic value: Indians are united in the view that respecting other religions is a very important part of what it means to be a member of their own religious community. 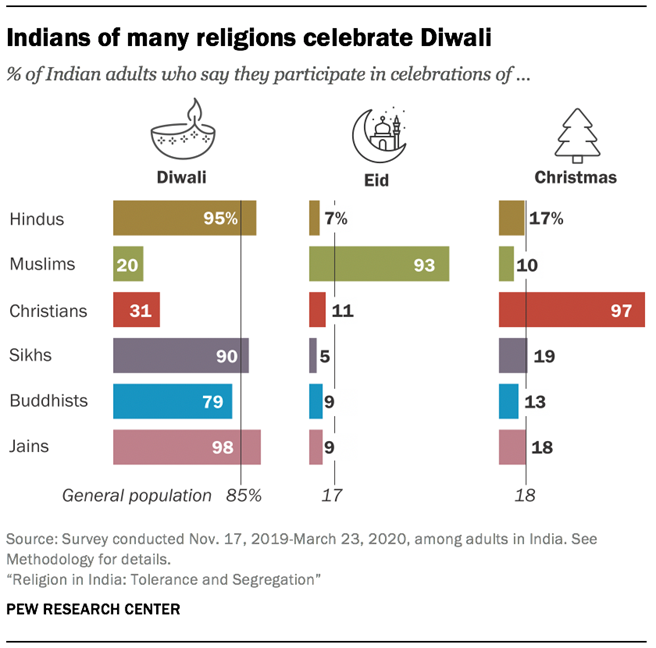 There is tolerance and yet there is segregation too!

Even though Indians tend to value their country’s religious diversity, India’s religious communities generally don’t see much in common with one another. Across religious groups, large shares say that, based on what they know, members of their religious group are “very different” from followers of other religions. In fact, only 36% of all Indian adults say their group has “a lot in common”.

Indians’ concept of religious tolerance does not necessarily involve the mixing of religious communities. While people in some countries may aspire to create a “melting pot” of different religious identities, many Indians seem to prefer a country more like a patchwork fabric, with clear lines between groups.

Religion has been playing a significant role in political India.

Hindu nationalist sentiments appear to have less of a foothold in the Southern part of India. Among Hindus, those in the South (42%) are far less likely than those in Central states (83%) or the North (69%) to say being Hindu is very important to be truly Indian. In the 2019 parliamentary elections, the ruling  Hindu Nationalist party in power in India’s lowest vote share came in the South. In the survey, just 19% of Hindus in the region say they voted for the ruling party, compared with roughly two-thirds in the Northern (68%) and Central (65%) parts of the country who say they voted for the ruling party.

India is a country simultaneously boasting one of the fastest-growing economies in the modern world while struggling with some of the worst poverty on earth.

In the two decades since the Indian economy opened to the world, fresh contradictions have emerged: rapid economic growth but a snail’s pace of socioeconomic development, abject poverty that coexists with obscene wealth, and rampant corruption amid vows of probity in public life.

Rather than living with contradictions, as the country always did, it seems that India learns to grapple with them quickly.

Even books about India nowadays appear to be dualistic. An Uncertain Glory, written by the economists Jean Drèze and Amartya Sen, and a McKinsey & Company–edited collection, Reimagining India, could not be more different. One is scholarly, policy-oriented, and data-driven; the other is a collection of 65 short, expert-authored essays on an array of topics. Together they capture the torturous struggle to create a new India.

India’s duality is best illustrated in the economic recovery path that India is experiencing.

The pandemic caused an increase in savings with the top income quintiles, who deferred consumption due to mobility restrictions and economic uncertainties.

The rest, in the bottom 50 percent income quintile, suffered permanent loss of jobs and incomes. It is the former section of the population that is leading the present recovery. The present growth is a result of lower base effect and pent-up demand.

Two economic phenomena substantiate these claims; as the rich get richer in terms of wealth and consumption, it creates a savings glut. The glut forces the interest rate to fall; people search for alternative asset classes for a higher return. In India, these excess savings are getting channelled into the stock markets and real estate, fuelling asset prices. Asset price bubbles make the rich feel even wealthier, exacerbating inequality.

This phenomenon explains the recent surges in stock markets and real estate, despite frail macro fundamentals. Asset price bubbles also exacerbate the economic duality. A proportion of the population recovers faster and starts to spend money on goods and services at an increasing pace. This is reflected in most high-frequency economic indicators.

On the other hand, a larger proportion of the population is yet to recover fully from job and income losses. For instance, per CMIE’s consumer pyramid survey, the labour force participation rate has declined from 43 per cent to 39 per cent between March 2020 to September 2021.

In absolute terms, 1.4 million people have been forced out of the labour force. The unemployment rate (age 15 years and above) for the quarter ending September 2021 was 7.3 per cent, roughly the same (7.5 per cent) recorded a year ago. In addition, 2.6 million people have lost their jobs since the start of the pandemic.

Bangladesh has developed faster than India has, over the past decade. Some economists argue that it scores above India on several parameters because its women are more involved with the economy than are their Indian counterparts.

That highlights another contradiction: Women have always been at the heart of Indian society (Indians refer to their country as Mother India), yet many Indian men tend to view women as little more than chattel. Drèze and Sen are hopeful, though:” It is a very positive development that violence against women has, at last, become a big political issue in India,” they write.

Indian society today has a very interesting mix of nucleus families as well as large extended families of multiple generations living together under the same roof. While large families are more predominant in rural India, many large families can be found in a large metropolis where multiple brothers after marriage live in the same family house together with their parents and sometimes grandparent.

Andersen, the Swedish product manager, was recently promoted. His current responsibility also includes operations in the Indian region where he has a small team of 6 people. All of them are very talented and quite diverse in terms of gender, age and regions within India where they come from. A special project was assigned to this team which required very intense effort and tight coordination. Since this was a special project added to the Indian teams’ day job, Andersen announced an incentive package to be administered at the successful completion of the project.

The project was a roaring success. Driven by his understanding of the collectivistic nature of Indian society where team members presented themselves as family members, Andersen thought it was prudent to equally distribute the incentive amount to all members. And apparently, it worked well because everyone appeared happy. But this happiness lasted only till the next day when one of them sought a 1-on-1 meeting with Andersen to express his disappointment of not getting rewarded incommensurate with his contribution compared to the rest.

Rahul, this young bright MBA grad identified in the organization as a Top Talent, expected a disproportionate share of the reward due to his critical contribution. And this is what he communicated to Andersen in no uncertain terms which caught Andersen with total surprise.

The duality of Indian society where highly competitive individuals are found demanding disproportionate reward is increasing in urban India. Professionals from other national origins may well be prepared for such surprises by getting to know the individual team member better than painting all with the same broad brush.