Overview of the Saudi business environment

The Kingdom of Saudi Arabia is an economic powerhouse in Western Asia. With the world’s largest oil reserves and cities that serve as regional hubs for business, the country is developing a modern infrastructure on par with leading industrialized nations. Thus, Saudi Arabia continues to enjoy steady economic growth and offers tremendous business opportunities for regional and international investors.

As a consequence, Saudi Arabia is home to major global corporations. These firms include Saudi Aramco, the world’s most valuable listed company;, Almarai, the world’s largest integrated dairy company and the Middle East’s largest food and beverage manufacturer and distributor; and SABIC, one of the world’s largest non-oil industrial producers. The country’s G20 economy boasts an annual GDP exceeding US$700 billion for a population of around 35 million. In strategic terms, the Arabian Peninsula lies at the intersection of the major trade routes linking Asia, Africa, and Europe. Its natural resources include not only enormous natural reserves of oil and gas but also deposits of valuable minerals that hold great potential for future investment [1].

The government of Saudi Arabia has embarked on an ambitious program of cultural, social, and economic reform known as Vision 2030. Launched in 2016, the aims of the program are to leverage the country’s assets and attract foreign investment in the Middle East. The expectation is that, by 2030:

Hence, the government is focusing its efforts on improving the environment for foreign direct investment by modernizing foreign investment law, directing interest toward economic sectors other than energy, and strengthening and clarifying its domestic regulatory framework. With Vision 2030, the Saudi government seeks to re-orient and diversify the economy, moving away from dependence on oil revenue and promoting other economic activities, especially tourism [2].

Saudi Arabia plays a central role in the Islamic world as home to its two holiest shrines, Mecca, where the Prophet Mohammad was born, and Medina, where he was buried. Millions of Muslims from around the world travel to Mecca every year to perform the Islamic pilgrimage, or Haj, culminating in a visit to the Kaaba, the most sacred site in Islam. It is toward the Kaaba that Muslims around the world face during their daily prayers. Consequently, religious tourism represents a major source of revenue for Saudi Arabia and holds great potential for foreign investment, particularly in the hospitality industry. The government is planning to boost the numbers of religious tourists to Saudi Arabia significantly and, therefore, is investing in the infrastructure to accommodate 30 million annually by 2030.

In addition to promoting religious tourism, Saudi Arabia in 2019 opened its borders for the first time to leisure and entertainment tourists, again, as part of Vision 2030. These plans include making available more than $800 billion in funding for culture, leisure, and entertainment projects that are planned to attract 100 million foreign visitors annually by the decade’s end. Several large-scale projects are also currently underway, such as Neom, a futuristic smart city in the north Red Sea designed to serve as a major tourist destination, with completion of the first phase on schedule for 2025 at an estimated cost of $500 billion [3]. Qidddiyah, a center for entertainment, sport, and culture located near the capital of Riyadh, is another megaproject set to complete its first phase by the middle of the decade [4].

What to look for in a Saudi business partner

When doing business in Saudi Arabia, it is crucial to choose a local partner with whom you can build a fruitful and lasting relationship. This partner should be experienced with prevailing rules and customs and, ideally, share your firm’s values, mission, and goals. More specifically, you need a Saudi partner with the following fundamental attributes.

Here are some useful tips for finding partners who possess these attributes.

The persons mentioned in this case study are fictitious composites, and any resemblance to individuals living or deceased is entirely coincidental.

Kathy Jones is a C-Level executive with XYZ, a leading US media company, who is visiting the Middle East on business for the first time. She and four members of her senior team have arranged to meet the owners of MNO & Sons, a leading Saudi family business with which XYZ has been negotiating a multi-million-dollar licensing agreement that would help the US firm to expand in the region. At stake, then, is a project that promises to generate considerable revenue for XYZ and its partners over the coming years.

The meeting is set to take place at XYZ’s regional office in Dubai. The senior Saudi team has flown in from Riyadh to Dubai, led by Faisal, the second son of the MNO’s founder and head of the firm’s media department, and the VP for media revenue who is Faisal’s right hand. Faisal is in his mid-thirties, easy-going, and, though he speaks little English, an enthusiastic supporter of the partnership with XYZ.

XYZ’s local Middle East team has negotiated the arrangements for the meeting, including the agenda that Kathy’s PA sent a few days ahead of time. However, since they were not mentioned in the agenda, the members of the local team are not among those at the table when the meeting convenes.

The Saudi team arrives 15 minutes late. Faisal shakes hands only with the male representatives of XYZ. Each member of Faisal’s team then makes a brief presentation, after which Faisal presents MNO’s action plan for expanding XYZ’s footprint in Saudi Arabia. Next, Kathy introduces her team members cordially and asks Faisal some detailed questions about the action plan. Faisal answers politely but without making eye contact with Kathy, addressing instead the male members of her team. After about an hour, the meeting ends. Within a few months, it becomes clear that the project will not go forward.

The reasons why the partnership between XYZ and MNO failed to take root are evident, on the one hand, in the notes that Kathy made on the meeting:

Faisal’s assessment of the meeting was equally unfavorable:

The unwelcome outcome of this one-hour meeting for XYZ Media was the loss of what could have been an enormously profitable deal. The problem was one of the cultural differences. A useful way to analyze the failure of this partnership is from the perspective of the cultural dimensions that Hofstede Insights’ Country Comparison Tool assesses.

As has been seen, the conservative nature of Saudi society means that Saudis do not shake hands or establish eye contact with members of the opposite sex. From the perspective of Western cultures, by contrast, shaking hands and looking someone in the eye indicates sincerity and trust, irrespective of gender. Likewise, Saudis consider casual and revealing attire inappropriate for professional settings. Kathy wore a skirt at the Dubai meeting that was immodest by Saudi standards but perfectly acceptable in the workplace for Americans or Europeans.

A consideration of each of the six cultural dimensions [6] sheds further light on the problems that derailed the partnership between XYZ and MNO. 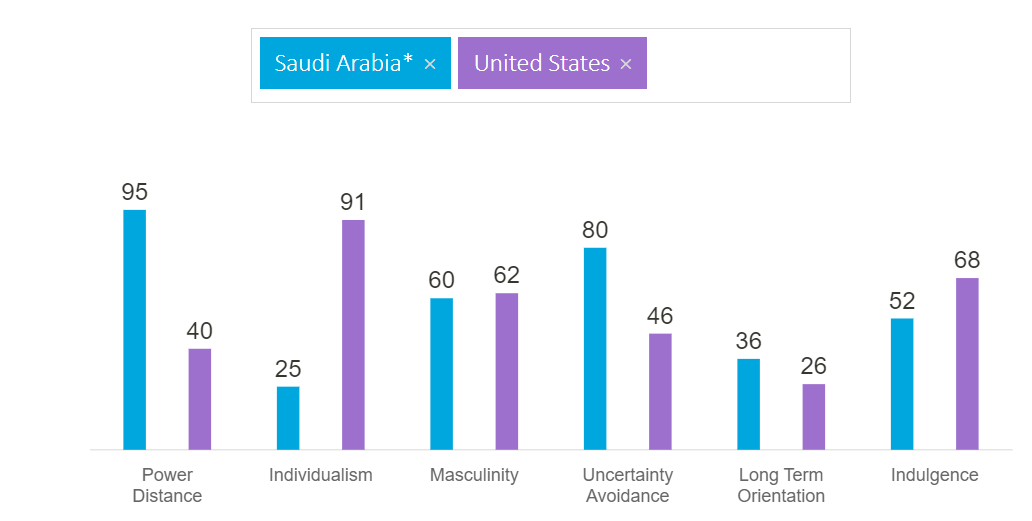 [5] Bitar, A. (2020). Bedouin Visual Leadership in the Middle East: The Power of Aesthetics and Practical Implications. Cham, Switzerland: Palgrave Macmillan.