Egypt brings to mind an ancient civilization with grand temples and pyramids, the Sphinx, and mummies. For many foreigners, it is little more than the exotic land of pharaohs. And, indeed, ancient Egypt is one of the cradles of human civilization, being closely tied to the Levant and Mesopotamia. This heritage traces back to the sixth millennium BCE, when Neolithic cultures developed independently in Upper (i.e., southern) and Lower (i.e., northern) Egypt. The two regions were first united under a single kingdom around 3150 BCE, inaugurating a series of dynasties that ruled for the next three millennia.

Egypt is a transcontinental country, connecting Africa to Eurasia through the Sinai Peninsula. The Mediterranean Sea marks its northern boundary and the Gaza Strip, Israel, and the Red Sea its eastern border, with Sudan to the south and Libya to the west. The ancient Greek historian Herodotus aptly called Egypt the “gift of the Nile,” for the river that flows through the surrounding desert from the south all the way to the Mediterranean Sea brings life and prosperity to the country. With a population of greater than 100 million, Egypt is the most populous of the “MENA” (Middle Eastern and North African) nations and the third most populous African nation (after Nigeria and Ethiopia).

Arabic is Egypt’s official language and Islam its official religion. Sunni Muslims account for around 85% of the population and Coptic Christians around 10%, with other religions and sects accounting for most of the remaining 5%. Cairo, the nation’s capital, is also its largest city and the largest urban area in Africa and the Middle East, with an estimated population of around 20 million within a greater urban area of 1,709 square kilometers.

Egypt declared itself a republic after the revolution of 1952 and briefly merged with Syria in 1958 to form the United Arab Republic, which dissolved just three years later. In the mid-20th century, the country endured social and political instability punctuated by a series of armed conflicts with Israel (in 1948, 1956, 1967, and 1973). The signing of the Camp David Accords with Israel in 1978 then ushered in a long period of political stability that came to an end in January 2011 in a revolution associated with the Arab Spring movement fueled by demands for economic and political reform. After several years of uncertainty, the political situation seems to have stabilized in recent years. Egypt currently enjoys economic prosperity and political stability that position the country to be an economic leader in Africa and the Middle East.

Despite its excellent geographical position linking Africa, Asia, and Europe and vast human resources, Egypt remains an underdeveloped country, with a per capita GDP of US$5,500. Its economy is still the second-largest in Africa, though, with a total GDP nearing $400 billion. Recently, the government has been modernizing the infrastructure as part of efforts to ensure that Egypt realizes its economic and human potential as a competitive business environment in the MENA region.

The current economy depends heavily on three sectors: tourism, agriculture, and tolls on transit through the Suez Canal, which serves as a conduit for some 7.5% of the global sea trade. In February 2016, the government launched Egypt Vision 2030, an ambitious plan for sustainable economic and social reform. Accordingly, over the coming decade, improvements are expected in the quality of life throughout the country in terms of reducing poverty, managing population growth, empowering women and young people, building a knowledge economy, and encouraging entrepreneurship through small and medium enterprises. The strategy for achieving these goals is to leverage Egypt’s assets, increase the involvement of the private sector and civil society in national projects, and attract foreign investment in the targeted economic sectors. [1]

The government has set a target for annual economic growth of 6-7% over the next few years as part of a new round of structural reforms. To achieve this goal, the focus has been on developing the manufacturing, agriculture, and information technology sectors. Currently, Egypt’s economic outlook is fairly positive; thus, it was the only MENA country to post growth in 2020 amid the global pandemic. Projections are for real GDP growth of 3.3% in 2020-2021 and 5.6% in 2021-2022. [2]

Egypt represents a very dynamic market with great investment potential. The “Where to Invest in Africa 2021” report identified the country as the most robust market for investment in Africa. [3] Most capital investment has been in the energy, construction, and transportation sectors. Much of this investment has been directed to mega projects such as the new 44-square-kilometer Administrative Capital (with an estimated cost of US$ 1.2 billion for the first phase), the third phase of the Cairo metro and the city’s first sky train, and the development of the Zohr gas field, the largest natural gas deposit yet discovered in the Mediterranean area.

What to look for in an Egyptian business partner

When doing business in Egypt, it is crucial to choose a local partner with whom you can build a trusting and lasting relationship. Such a partner must not only have a good understanding of Egyptian culture but also share your firm’s values, mission, and goals. More specifically, look for the following fundamental attributes in an Egyptian partner.

Be especially careful with

Ed Ellison is the Head of International Franchising at Glowing Dough, a US-based pizza chain. Recently, Ed signed a three-year master franchising deal with Mohamed Salem & Sons to bring Glowing Dough to Egypt. He has conducted the negotiations with Ezzat Salem, the eldest son of the founder Mohamed Salem and the firm’s CEO. Ezzat lived in Houston, Texas for more than four years while earning an MBA from Rice University and speaks fluent English. He has submitted to Ed an ambitious plan to open 20 franchises across Egypt.

Ed now visits Egypt for the first time to meet Ezzat and hold a two-day training seminar for the franchising team. Before he leaves the US, he shares the schedule and relevant information with the attendees. By the end of the two days, though, Ed is becoming frustrated that the members of the team are consistently late to the sessions and do not seem to act in a professional manner, in particular, making what seem to him exaggerated displays of respect toward himself and the senior members of the Salem & Sons team. In addition, it bothers Ed that Ezzat is practicing nepotism, peopling his team with relatives and close friends irrespective of their qualifications or experience. Soon, Ed begins to have doubts about the franchising deal.

Ed needs to understand the behaviors of Ezzat and his team from the Egyptian cultural perspective. A reflection on cultural dimensions [6] informs us that Egyptian culture is highly collectivist and has a relatively large power distance. 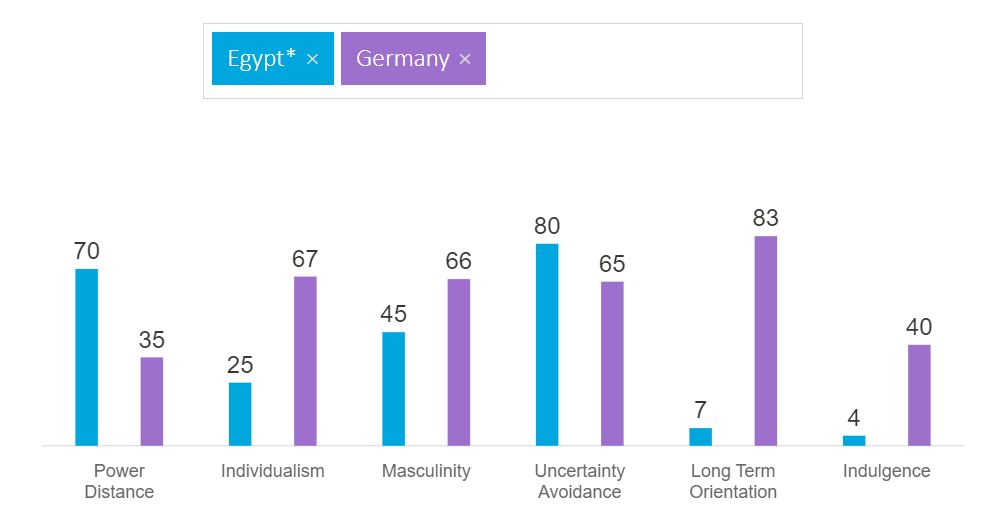 [4] Bitar, A. (2020). Bedouin Visual Leadership in the Middle East: The Power of Aesthetics and Practical Implications. Cham, Switzerland: Palgrave Macmillan.